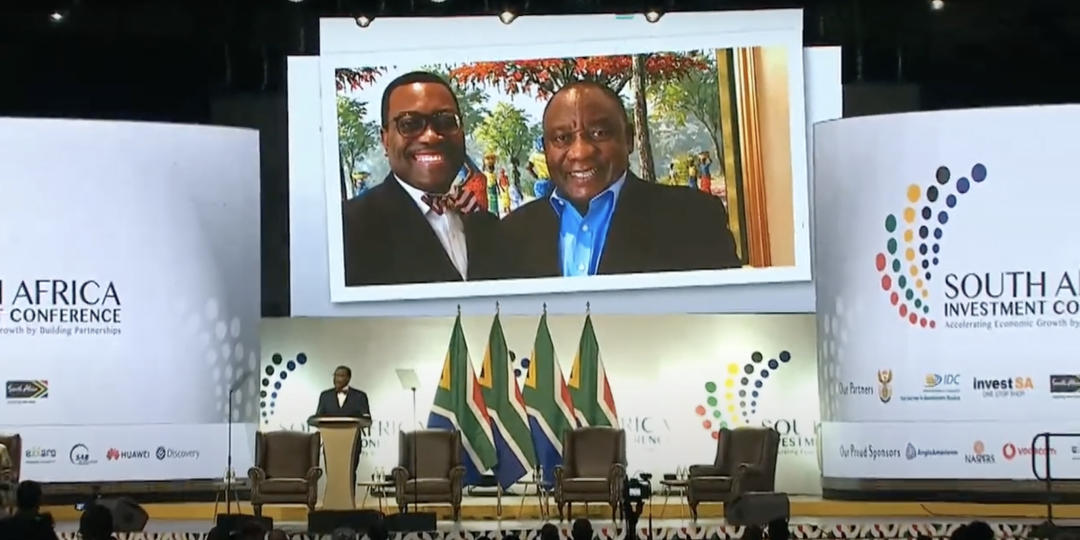 African Development Bank Group (www.AfDB.org) President Dr Akinwumi A. Adesina has pledged his institution’s support for South Africa, announcing a US$2,8 billion package for the country over the next five years. He did this at the opening of the South Africa Investment Conference in Johannesburg’s Sandton Convention Centre.

Some $400 million (R 6 billion) will support Eskom and the country’s energy transition, he said.

President Cyril Ramaphosa opened the South African Investment Conference, the first physical convening of participants since 2019, with a message of optimism and determination in the face of a global pandemic, tough economic headwinds, and millions of job losses.

President Ramaphosa said: “We meet at a time when our country is facing huge challenges but great opportunity and promise. Our economy has been severely damaged with the loss of two million jobs. I am here to share with you what has been done and what we are doing.”

He outlined measures his government has made, including social and economic relief packages, describing them as “difficult but necessary reforms” in energy, state-owned enterprises, and the fiscal and taxation sectors, to drive economic growth.

According to Ramaphosa, “No economy can operate without a reliable supply of electricity.” He said ongoing reforms to the energy sector included changes to Eskom, the country’s energy supplier, and additional generation capacity mainly through wind and solar sources of energy. He announced that a presidential task team set up to advance the country’s just energy transition to a low-carbon transmission economy, was on track.  “We invite you to be part of the South African growth story.”

Adesina pledged $400 million from the African Development Bank in support of the country over the next three years, particularly for Eskom, as it transitions to renewable energy. He said the Bank was working with international partners, especially the G7 countries, to establish a just energy transition facility that will support South Africa in raising at least $27 billion.

“We will do it without South Africa going into debt,” Adesina said. “I applaud the G7 countries, for their commitment of $8,5 billion in support of South Africa’s just energy transition.”

Committing the $2,8 billion to South Africa over the next five years, Adesina said: “This financing will support public and private sector investments in priority areas of agriculture, renewable energy, transport, youth employment, health, vaccines manufacturing, among others. We know South Africa is bankable.”

The African Development Bank Group’s active portfolio in South Africa comprises 23 operations with a total commitment of about $4,5 billion in financing. Since 1997, the Bank has invested nearly $7 billion in the country in energy and infrastructure.