Making the most of solar thermal energy

Making the most of solar thermal energy 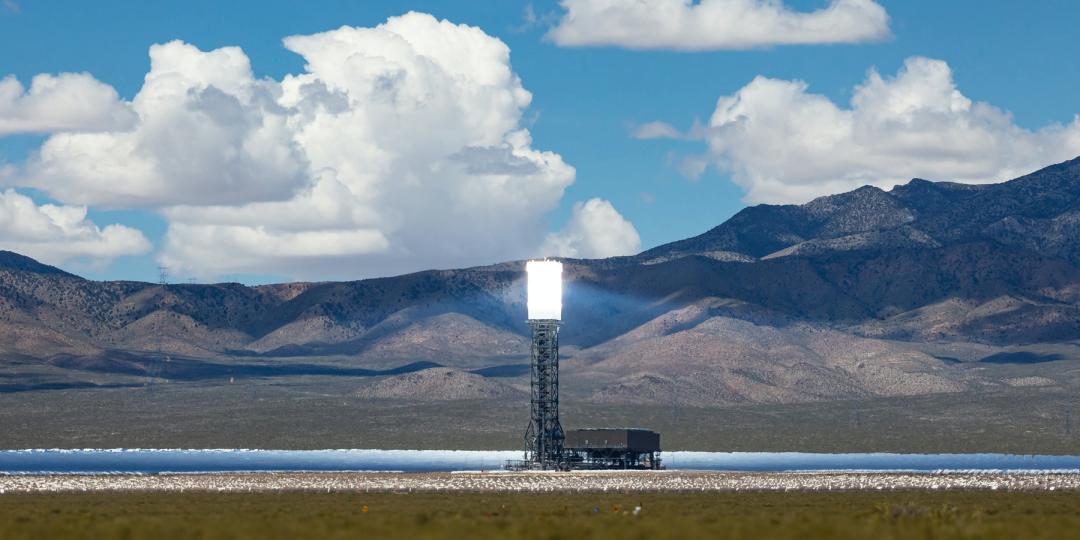 Concentrated solar power (CSP) generation uses solar radiation to generate electricity from solar thermal energy. This power generation is employed in regions of high solar insolation. While many commercial CSP plants are operating at present in various places, technological development is advancing faster than ever. This is partly due to the current solar-to-electric efficiency of CSP.

In pursuit of greater efficiency, controls and instrumentation for CSP are continuously required to respond to the unique requirements which differ depending on the type of system employed and vary with the technological advancements. A typical CSP plant comprises a solar field and a power block. The sun’s rays are concentrated to heat up a fluid to generate a heat source which produces a vapour to drive turbine-generators. These generators ultimately produce electricity in the power block.

A number of concentrating technologies are in practical use, such as the parabolic trough, dish Stirlings, linear Fresnel reflectors, and solar power towers. Of these, the parabolic trough and solar power tower concentrators are used in many large-scale CSP plants currently in commercial operation. These concentrators, however, do not achieve results even close to their theoretical maximum, and research into, and the development of, various solar concentrators for use in solar fields continues to be pursued.

To obtain the maximum possible concentration with any given concentrator, sensors and controllers for each solar field are required to follow the position of the sun. These orient the reflectors in line with the movement of the sun at all times so that the working fluids, often referred to as heat transfer fluids (HTFs), may continuously receive the utmost solar thermal energy. In addition, centralised supervisory monitoring and control of these local controllers in the solar field is important to maintain maximal concentration.

A power block usually comprises the same pieces of equipment as those commonly seen in the power block of a thermal power station, such as turbines and generators. However, in addition to such equipment, the HTF that carries the heat from the fields and the heat storage equipment require monitoring and control.

Continuously orienting the reflectors, i.e. manipulating the dual- or single-axis drives (depending on the type of concentrators) of the reflector, according to the position of the sun to maximise the concentration in solar fields largely contributes to increases in the efficiency of the overall CSP plant. Plant control systems are thus required to provide easy-to-use orientation controls for the individual reflectors at least, but also encompass the turbine-generator supervision and pump controls. In other words, it must offer a total plant monitoring and control solution, enabling highly efficient operation of the entire plant.

There are various forms of solar concentration in CSP as mentioned, however, each solar thermal concentration unit is often called a solar collector assembly (SCA) regardless of the form. Each SCA, or a group of SCAs, is associated with a local box containing a controller and input/output unit for reflector position control and communications with a supervisory system. Although the specifications required for the local boxes differ depending on the type of the SCA in use, the following briefly describes the general requirements for controlling those assemblies in currently predominate parabolic trough and solar power tower systems, together with their mechanical features.

A parabolic trough consists of a linear parabolic reflector that concentrates the sunlight onto a receiver positioned along the reflector’s focal line. The receiver is a tube filled with a heat transfer fluid (HTF). Each SCA is installed in such a way that two hydraulic cylinders rotate the reflector along a single, north-south axis to make it follow the sun during daylight hours.

A parabolic trough SCA is equipped with a clinometer, a temperature sensor for the receiver, and limit switches on both ends of the rotating angle. The clinometer provides the feedback signal for the collector angle controller, while the temperature reading and switch statuses are used for overheat and mechanical trough protection.

Two hydraulic drive cylinders are usually used to tilt a parabolic trough reflector in an angular range of more than 180° to enable a broad range of solar tracking. For smooth changes in reflector angle, the point of inverting or stopping the telescoping action of the cylinders, called the dead point, is determined by the mechanical design of the trough, and needs to be stored in the controller. A motor is sometimes used as the driver instead of hydraulic cylinders for small-scale SCAs. In this case, the tilt angle is calculated from the count of pulses produced by a pulse generator which is attached to the gearhead.

Parabolic trough control does not always perform a solar tracking action. When the temperature of the HTF flowing inside the receiver tube has increased beyond a specified parameter, defocusing is required. That is, the reflector angle needs to be changed so as to focus away from the receiver tube to prevent thermal degradation of the HTF. The action to be taken in case of a high fluid temperature and the angular threshold in defocusing must be adjustable on site.

Structure and control of heliostat

Instrumentation for a heliostat differs slightly from that for a parabolic trough. A pulse counter is usually used for azimuth measurement, and a clinometer for zenith angle measurement. In addition, limit switches are installed on both ends of the axes. Regarding the actuators, a hydraulic cylinder is usually used to rotate a heliostat along each axis, similar to a parabolic trough.

For a hydraulic cylinder-driven heliostat, as a single cylinder can tilt or rotate each SCA in the entire angular range along the tilt or rotation axis, there is no dead point in terms of control. Nevertheless, as no SCAs are installed at exactly the same location, the direction of the receiver differs between all SCAs and must be preset in the individual SCA controllers. This is because, during the daytime, the reflector surface of each SCA should be maintained perpendicular to the bisector of the angle between the directions of the sun and the receiver.

Another type of common drive is a motor, which is often used for small-scale SCAs. Except where highly accurate positioning is required, such as for SCAs located far from the tower, stepper motors (also called pulse motors) are sometimes used as the drivers. In this case, the controller determines the number of pulses needed to drive the motor to move the reflector to the desired angle.

Of all the field sensing in CSP facilities, meters for measuring the flow of HTFs is among the most important. The precise measurement of the heat transfer medium is essential whenever receiver, collector, or system performance or efficiency is assessed based on the heat balance. Large-scale parabolic trough applications generally use ultrasonic or vortex volumetric flowmeters, whereas smaller CSP facilities may use Coriolis mass meters. Heliostat applications often use vortex meters or orifice flowmeters depending on the heat transfer medium.

Ultrasonic flowmeters cause no pressure drops, and therefore are suitable for corrosive fluids. They are capable of bidirectional flow measurement, while providing reliable signal linearity. However, they are expensive and provide weak signals at low flow rates, are unusable for laminar flows, and need the density of the HTF for mass flow measurement.

Vortex flowmeters have no moving parts, and are ideal for liquids, gases, and steam. They impose minimum pressure drops and are extremely low maintenance. However, they are unusable for laminar flows, high-viscosity fluids, and high Raynolds number (>104), and susceptible to pipe vibration. They also require the HTF density for mass flow measurement.

The most suitable flowmeters for HTFs below 400˚C are ultrasonic and vortex meters yet ultrasonic meters create a greater risk of potential leakage. Coriolis meters may be the best for small-size pipes. Anything above 500˚C may require orifice flowmeters to be used.

A typical HTF in CSP is thermal oil, its maximum working temperature and pressure are 400°C and 40 bar respectively and the Raynolds number does not exceed 104. Considering accuracy, measurement, range, pressure drops, price, corrosion, and maintenance, the best selection for leakage prevention are vortex flowmeters with butt-weld connections. In addition, today’s multi-variable vortex flowmeters with a built-in temperature sensor and digital signal processing technology, have enabled automatic mass flow measurement. Several cases have been reported of HTF leakage from flange connections of ultrasonic flowmeters at a certain CSP facility.

In the local box for each SCA, a rugged, small-footprint, low-power controller with a configurable input/output (I/O) interface is desirable. A built-in solar position algorithm is mandatory. Needless to say, considering the environment of most typical solar fields, the controller must be able to operate in a wide temperature range, e.g. -20˚ to 70˚C, as well as allowing for usage in a fanless box in the field.

Whatever the SCA type may be, a huge number of local SCA controllers exist in a solar field. For centralised control and monitoring of those controllers as well as field data, a SCADA system is often employed as a solar field control system (also called solar communication system).

Control and monitoring is required for activities such as sending commands to change their modes including auto-tracking, defocus, remote manual positioning, preset washing position, preset fire position, wind protection, and freeze control. SCADA for CSP, especially for large-scale CSP facilities, is often required to be able to change control modes for a great number of SCAs at a time, in order to prevent the heat transfer fluid from being affected by accidental overheating. For example, if a HTF pump trips, the fluid flow in the receiver tube decreases abruptly and a rapid increase in fluid temperature may result.

In a power block, control and monitoring is required for the HTF which transfers heat from the solar field and heat storage equipment to a steam turbine and condenser. A distributed control system (DCS) is used for temperature, flow, and pressure control of the HTF and steam, and supervisory control of the turbines and generators.

Increasingly, many CSP plants perform, via human-machine interface (HMI) at the power block, status monitoring and mode changes for the individual solar collectors in the solar fields. This allows the use of HMI at the power block DCS as the “cockpit” for the entire CSP plant. Employing a DCS from the same manufacturer as that of SCADA for the solar field would be beneficial to ensure a tight system integration. This enables a single “cockpit” to be operated for the entire plant control and allows for easy addition of various optimisation and efficiency improvement solutions which encompass the total plant in future.

Some CSP plants have heat storage equipment to extend the operating time. A typical storage medium is molten salt. The storage equipment usually comprises a hot tank and a cold tank which are connected to each other via a heat exchanger. A DCS is used to monitor tank temperatures and heat medium flow rate, as well as performing pump control in such a way that:

When storing the heat, the storage medium is pumped from the cold tank to the hot tank while feeding part of the hot HTF from the solar field to the heat exchanger to heat up the medium.

When releasing the heat (after sunset), the storage medium is pumped from the hot tank to the cold tank to heat up the HTF via the heat exchanger. At this time, the flow of the HTF bypasses the solar field.

This article was first published in Energize, September 2015.