Community concerns about Vaalputs nuclear dump not being heard

Community concerns about Vaalputs nuclear dump not being heard 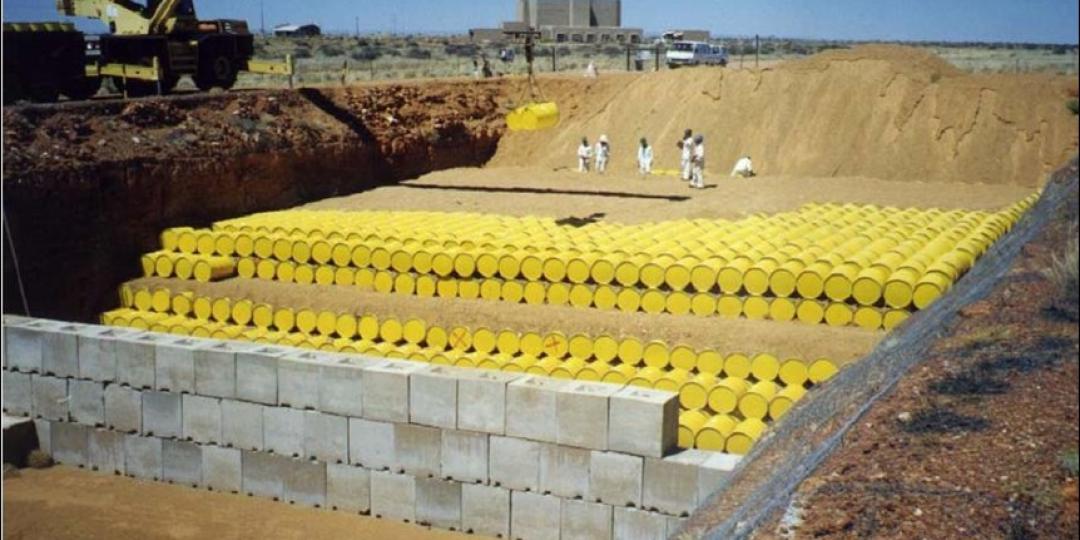 On 16 March 2022, Peter Becker of Koeberg Alert Alliance (KAA) presented to a workshop organised by the Southern African Faith Communities' Environment Institute (SAFCEI) in the Northern Cape. SAFCEI and the KAA sometimes work together informally on matters that affect communities. Community members wanted to understand more about how nuclear power works, and also how to learn more about the waste which is disposed of at Vaalputs.

Vaalputs is situated in the Northern Cape, about 78km southeast of Springbok. Here, short-lived low and medium waste is buried in shallow trenches. According to the National Radioactive Waste Disposal Institute (NRWDI) website: “Radioactive waste is different from other types of waste in that it contains radioactivity above certain concentrations. This waste needs to be disposed of in a special manner that isolates it from humans and the environment for as long as necessary.”

Participants pointed out that this site was chosen by the apartheid government without any consultation with the communities in the area.

Coincidentally, at an Imbizo at the CTICC on the 16 and 17 March 2022, NRWDI made a presentation which included this slide: 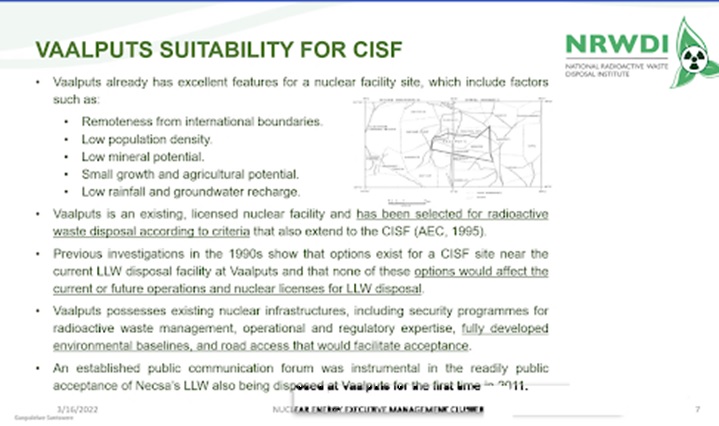 The NRWDI is proposing that a Central Interim Storage Facility (CISF) for high level nuclear waste be constructed at Vaalputs and that NRWDI anticipated that the “established public communication forum” would result in “readily [sic] public acceptance”.

High level waste remains dangerous for thousands of years and disposing of it safely is a challenging and most likely expensive process. This is intended as an ‘interim’ facility, but there is no indication as to when it will be moved to a permanent disposal site. The pattern from other countries is that these ‘interim’ storage facilities become permanent over time, as it is always easier to extend them a bit longer than to find a permanent solution.

Participants in the workshop were outraged at this assumption of their acceptance and wanted to know how their voices could be heard. Becker mentioned the Public Safety Information Forum (PSIF). As per NNR Act 1999 26(4):

“The holder of a nuclear installation licence must establish a public safety information forum as prescribed in order to inform the persons living in the municipal area in respect of which an emergency plan has been established in terms of section 38(1) on nuclear safety and radiation safety matters.”

Participants maintained that in the past only hand-picked people were provided with transport to attend these meetings. When the group looked up the Vaalputs PSIF during the workshop they found this:

Participants were angry by the misleading language being used by NRWDI. The claim in the NRWDI presentation that there was an “established public communication forum” as well as the website claiming the Vaalputs PSIF was “still active” left them feeling ignored.

No community consultation as required by law

The PSIF meetings as required by law have just been cancelled for the last two years. It appears that communities in the Vaalputs area have not been given the opportunity to attend meetings, virtual or otherwise, and ultimately those communities have been side-lined.

People who feel they are not being heard on matters of nuclear safety would normally be able to approach a member of the NNR Board who is appointed specifically to represent communities. However, this post was vacant for a long time until Becker was appointed to fill it in June 2021. Unfortunately, this channel is no longer available to them as Minister Mantashe removed Becker from this post in January 2022 for reasons which are being disputed. The full letter from the Minister discharging Becker is available here.

In a similar vein, Eskom’s stop/start work on extending the lifespan of Koeberg continues, despite the fact no public consultation process has taken place as yet. Eskom has estimated the cost of the Koeberg refurbishment to be about R20bn, although the overruns have already started. The latest extra cost incurred was flying out the French team only to find out the storage building for the old steam generators was not up to specification.

Without approval from the NNR for a life extension, Koeberg will have to shut down in July 2024 and hence Eskom is taking a risk in spending this money before getting that approval.

These are disturbing patterns of communities and the public being ignored, while various players push forward with plans for more nuclear facilities which would potentially affect those communities for generations to come.

The KAA has been very active in participating in the Environmental Impact Assessment Process (EIA) process for Nuclear-1, and seeks to inform Capetonians about the issues around Nuclear Power, and spread information about the latest status of Koeberg.

The KAA has also launched PAIA applications, such as for the Koeberg Emergency Response plan, which was refused by Eskom in 2010.

Koeberg Alert was initially formed in 1983 and started out as a local campaign against South Africa’s nuclear programme, in particular the construction of Koeberg Nuclear Power Station. Koeberg Alert was possibly the country’s first activist green movement, apart from Nan Rice’s Dolphin Action and Protection Group. For years it was allied to the broader democratic and anti-apartheid movement. It currently organises various anti-nuclear campaigns, engages with Nuclear related public participation processes, and lobbies decision makers.

It was reformed at the end of 2009, primarily as a Facebook group. Group membership grew rapidly to several hundred.