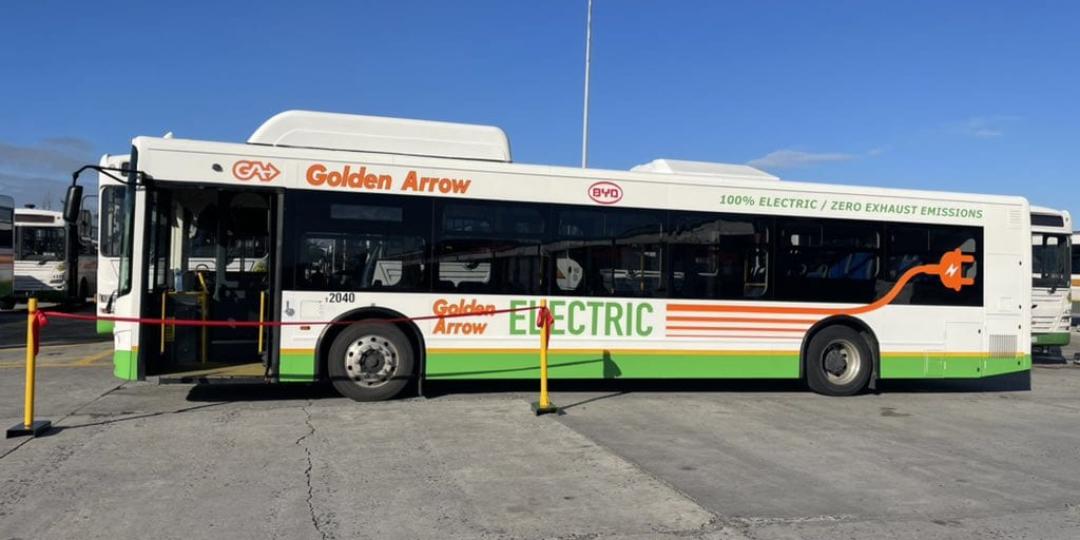 The first active electric bus in South Africa has been launched in Cape Town.

Golden Arrow’s renewable energy journey started in 2017 with the pilot installation of two solar plants of 25 kW each. The results were encouraging and ultimately led to two of its facilities being declared carbon neutral in 2020.

Given the success of projects to date, Golden Arrow decided to take on its next project, testing an electric bus. The company partnered with Chinese bus manufacturer Build Your Dreams (BYD) and uYilo to test two 100% electric buses for a 12-month period. One bus was tested without passengers, while the other was loaded with sandbags, equivalent to 44 passengers in weight.

According to GABS, from July 2021 the two electric buses have been incorporated into Golden Arrow’s day-to-day operations, carrying passengers between Retreat and Cape Town.

Golden Arrow engineer Gideon Neethling said the testing phase of the electric bus has been rigorous.

“For the first few months, we tested the buses in a range of circumstances without passengers. The aim was to get to know exactly how these vehicles perform before incorporating them into our operations. Testing these vehicles has been a joy for everyone who is part of the project. Each time we carry out a new test or reach a new milestone, the level of excitement increases further,” said Neethling.

He added there was much to be learnt about the new bus including electricity usage under different conditions, charge time between trips, possible scheduling challenges as a result of charge times, maintenance needs, battery degradation and other general operational challenges compared to the currently used internal combustion engine.

Golden Arrow’s trailblazing transport solutions include the testing of free wi-fi on buses, an electronic smartcard fare system and now the first electric bus to operate in active service in South Africa.

Mitchell said: “The Western Cape Department of Transport and Public Works and Golden Arrow Bus Services are working together on various technology solutions to improve public transport in the province. My department endorses innovation programmes such as this one given the challenges experienced by our commuters in the absence of the passenger rail system.”

Mitchell had an opportunity to ride the bus and said the safety of passengers is guaranteed.

“The narrative around safety on Golden Arrow buses is very different. After taking a ride in this bus, I am confident passengers will feel safe during their journey.”

GABS chief executive Francios Meyer said: “This is just another example of Golden Arrow’s commitment to innovation and sustainability. It was an honour to be able to show Minister Mitchell what the future of passenger bus services in South Africa looks like”