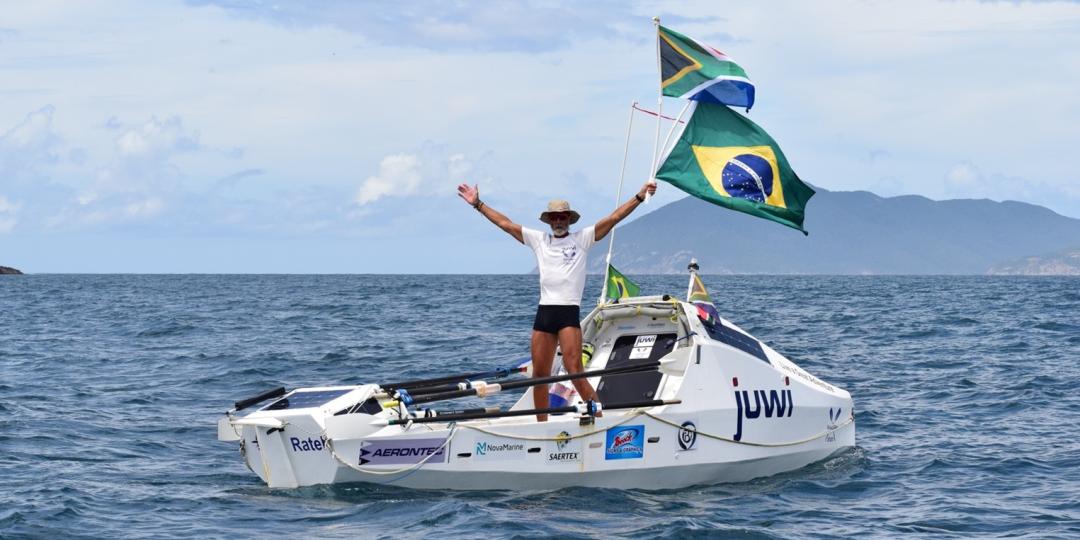 Economic development consultant in renewable energies and world record breaking ocean rower, Zirk Botha, has just completed a 72-day solo row from Cape Town to Rio de Janeiro, sponsored by juwi Renewable Energies, to promote sustainable development and the use of renewable energy. All the electronic equipment on his boat, Ratel, was powered entirely by solar PV. He shares the perspective he gained on his journey about the planet and our role in its future.

My Row2Rio experience taught me that a big project requires time. Time to research, time to plan, time to prepare and finally time to execute. That is in total contradiction in the world that we live in, where instant gratification and prioritising short-term goals over long-term goals has become the norm. Yet, we still believe that there is time, lots of time tomorrow and next week, next month and next year.

It is the belief that we have time that and that short-term priorities must take preference that has caused the planet to be in the critical state that it is in. During my 72 days at sea, I had no access to news, but I could observe the status of marine environment.

The lack of sea life even in areas, known to  have had healthy populations, was shocking. Over my entire 7200km journey I only saw three marlin, two small pods of dolphins, a sunfish and two dorados. Previously ocean rowers would have dorados and schools of fish using their boats for shelter for many weeks, but I experienced none of that. It is no surprise that many aquatic animals are featured on the WWF endangered species list. Countries should not be allowed to fish out the oceans across the globe, this often includes large fleets of foreign ships exploiting fish stocks far from their own coastal waters.

The tug that politicians face between people, profit and planet is a real one. With poverty escalating globally and a massive demand for jobs in a poor economy the pressure is on to preserve jobs, but, at what cost? Politicians globally should be better educated and informed about sustainable development in order to be able to make responsible decisions.

The UN Sustainable Development Goals are a well thought through policy, factoring in the need to fight poverty and provide poor people with basic resources including access to electricity and technology. This document should be a primary reference for all politicians and economists, because it strikes a balance between looking after and restoring our planet, while looking after the needs of humans.

As humans we are either active or reactive. Active means you are in control, reactive means you are being controlled by others and circumstances. My core purpose in completing the row, was to highlight the need for sustainable development planning, and especially the use of renewable energy as part of the solution for a healthier planet. Achieving sustainable development goals requires planning and being active. There is no instant gratification.

We, as the human race no longer have the luxury of time when it comes to sustainable development, simply because we have allowed greed and instant gratification to become the big drivers in decision making. Turning the tide against the destruction of the planet requires sustained action that starts today.

One of the key actions around sustainable development is ending the use of fossil fuels and choosing renewable energy. Converting no renewable energy is in direct alignment with the UN Sustainable Development goals. It is considerably cheaper than any other form of energy with a tariff that is reducing year on year and currently stands at half of fossil fuel and even less when compared to nuclear. It is also a lot quicker to establish a renewable energy facility, whether it is on a domestic or utility scale. Renewable energy does not impact on the environment, most notably it does not create pollution which causes lung diseases for residents in the area as does coal fired facilities, nor does it have the capacity to cause the devastation associated with a nuclear malfunction.

The challenge is that there are no quick fixes, and unless a medium- and long-term plan is put into place, all the jobs that politicians are trying to preserve at coal-fired plants will be to no avail.

Hard choices by strong leaders are needed to secure our future. Renewable energy made up 28% of the global total last year, up 2% on the previous year. There is a steady shift in investment appetite away from fossil fuels and this percentage will only increase. South Africa needs to follow the global trend.

The belief that we have time is wrong. Unless we find ways to protect the planet and create alternative means of growing the resources we need to survive, the human race will achieve a critical point of decline in the next ten years. Ten percent of the World population is surviving on $1,90 (R28,50) per day and 40% of the World population is currently surviving on an income of $5,50 (R82,00) per day. Adding any further disasters like Covid 19, will push populations across the brink. We no longer have the luxury of time. We need to act now.

The track record of international political leaders sadly is poor and we cannot rely on them to make responsible decisions. It is up to us to force them to do so. We need to make our voices heard – any way that you can. I chose Row2rio2020 to create awareness around Sustainable Development, please add your voice to mine, and demand responsible change.