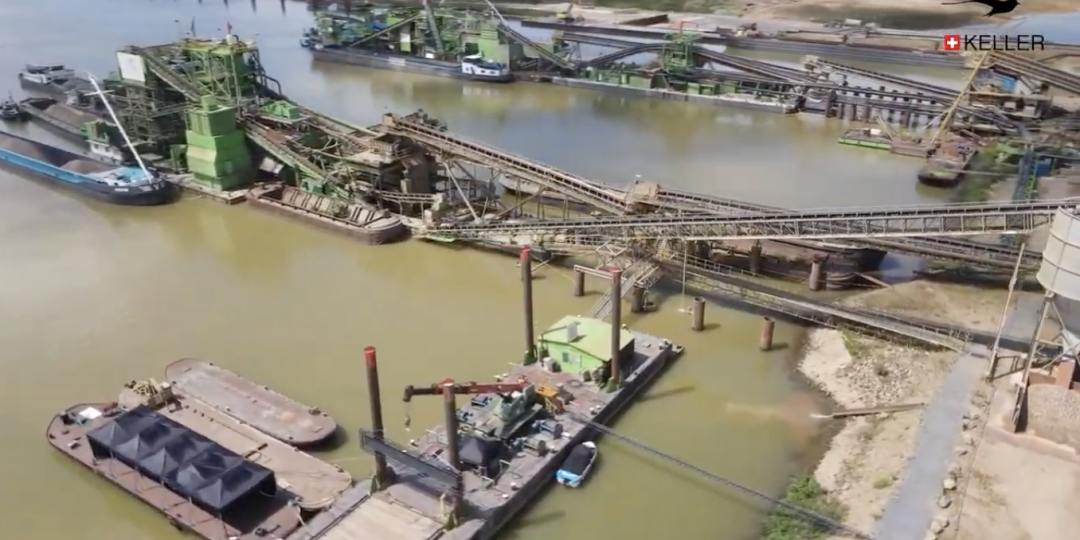 In the Dutch province of Limburg, the Grensmaas Consortium extracts about one hundred thousand tonnes of gravel every week. A quantity that requires an enormous logistical operation. Stopping the process is not an option. And certainly not unannounced. With one single sensor, Hans van der Meer can monitor that risk.

Hans van der Meer, head of production and technical services at Grensmaas gravel extraction site. "To give you an idea, one ton equals eleven wheelbarrows. On an annual basis, we extract four and a half million tonnes of gravel at this site. And this gravel extraction is an important part of the Grensmaas project. It is the financial engine and therefore one of the three important pillars of the project. Thanks to this gravel extraction, there are no costs for the taxpayer, and we create high water protection and nature development. We call it self-realisation," Van der Meer explains.

Back to the gravel extraction. What better example of a win-win-win situation could be found in this country? In 1993 and 1995, the province of Limburg was confronted with two floods on the river Meuse, which caused €200 million in damage. Society demanded more flood safety, but the cost of some €700 million was a stumbling block for years. Until an agreement was made with Consortium Grensmaas - a partnership of contractors, gravel producers - and ‘Natuurmonumenten’ - the Dutch organisation for the conservation and development of nature. Both high-water safety and nature development would be paid for with the proceeds from sand and gravel extraction along the Meuse. In the meantime, the river has been given 350 ha extra space to drain off water. That is the size of some 500 football fields. The stream bed was widened, banks lowered, and dikes raised.

The residents noticed it immediately: after long periods of rain the water level rises less quickly and stays lower. The land in the south of Limburg now stays dry at the same water level as in 1993 and 1995. And along the Maas, 1000 ha of new nature are being created, which in time will attract a million cyclists and walkers, as studies have shown.

Back to gravel extraction for the Grensmaas project, with which the Consortium must recoup its investment of €700 million for flood protection and nature development. That depends on the smooth running of the logistical process. "All the minerals are transported by barge, and the ships have to be able to come and go continuously. It is a constant puzzle to be able to transport everything at the right time," Van der Meer underlines.

The mix of sand and gravel that is excavated is called ‘toutvenant’. In the south of Limburg, it consists of 80% gravel and 20% sand. It is excavated with huge excavating machines and transported with specially designed trucks. "More to the north of the province, the toutvenant consists more of sand than gravel. That has to do with sediments from the time of the ice age." The gravel is rinsed and sorted using an ingenious system of conveyor belts, sieving machines, washers, screw conveyors and so on. Each dimension of gravel has its own final destination, from asphalt to decorative gravel.

During our visit, the Grensmaas shows its capricious nature. "Look", says Hans, "the river is much wider now than a few weeks ago. Because of the rain, the river now takes up much more space and mountains of gravel, which were lying on the bank a fortnight ago, are now in the water. There is also a huge difference between summer and winter season. In summer, the average flow is about 40 m3 of water per second; in winter, it can be as much as 2500 m3. During the floods of 1993 and 1995, it was around 3200 m3.”

Due to the nature of the production process, progress is largely dependent on the water level in the Meuse. This water level fluctuates greatly, which is also affected by the operation of the locks. Van der Meer wanted to be able to monitor and record the water level properly, also for the communication with Rijkswaterstaat.  “In the harbour, I have mounted a level sensor on a mooring post that communicates the water levels with the cloud via a LoRa network. This system from Keller gives me up-to-date information about the water level on a dashboard in my office. The firm's Martijn Smit helped us get the system up and running and thanks to the sensor's communication with the company's own Kolibri cloud, we now have all the information we can from that sensor."

If the water level is too low or too high, the process may come to a halt. "We had a feeling the water level fluctuated much more than the Directorate-General for Public Works and Water Management indicated, and that turned out to be true. Since we now have the ability to monitor it ourselves, we can also sound the alarm in good time."

The digital level sensor - series 26 X - not only measures the water level, but also the temperature of both the water and the air. "We cannot produce if there is ice formation, so we also want to be aware of that risk as early as possible. Under normal circumstances, production here goes on for six days a week, 07h00 to 19h00. If we know that this is going to change, we need to be able to respond as quickly as possible."

The Grensmaas is the unnavigable part of the Meuse, about 47 km long and since 1839 the border between Belgium and the Netherlands. In summer, the river is sometimes fordable, but during heavy rainfall it can swell to an enormous mass of water that caused floods in the past. It’s a capricious river.

The Grensmaas project is a self-realisation project covering a length of about 40 km between the city of Maastricht and the town of Roosteren. It is a nationally and internationally renowned project for communication and environmental management. The project will last until 2027. The flood protection and nature development have meanwhile been realised as agreed. The province of Limburg has now asked the Consortium to come up with smart and cost-effective plans to be able to realise the high-water safety in the province in the longer term in view of climate change.

After publication of this article, we were informed by Van der Meer that recent flooding in the area did not affect the locations where the Grensmaas project was completed.

Click here for product information and here for a video link

Visit on the social media platforms by clicking on the platform name: