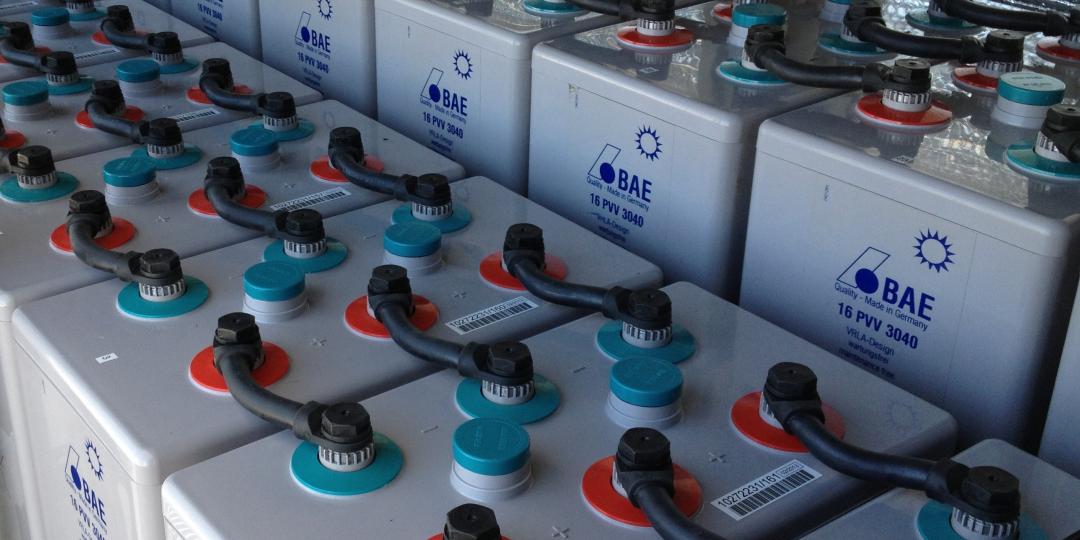 When specifying a storage battery for a solar application, a number of factors must be taken into account. If we consider a 200 Ah battery requirement for a solar installation, the first measurement would be the discharge rate. Stationary batteries re usually specified at C10 (20 A for 10 hours) and solar batteries at C100 (2 A for 100 hours). These discharge rates give different capacities.

Knowing the actual discharge time may allow us to optimise the battery further.

The lowest cost battery is the SLI (starter, lights, ignition) battery which is normally flooded so must be kept upright at all times. It is designed for vehicle applications where the design criteria are high start amps for a few seconds, low cost, low mass, and a life of three years. These SLI batteries are brilliant in achieving these objectives but when used in solar applications are very disappointing.

They are not designed for deep discharge and service life of less than 50% of the expected three years is often the result of deep discharge. We do not recommend this technology and do not offer this battery. SLI batteries could cost 50% to 75% of an AGM technology battery.

AGM (absorbent glass mat) technology batteries use “sealed” cells with vent caps to allow hydrogen to escape and are referred to as VRLA (valve-regulated lead acid) batteries. They usually use a flat plate design. These have excellent short-term current ability and are used extensively in UPS applications where deep discharges are infrequent.

AGM cells are often quoted as having a 12-year lifespan but often give an operational life of five to seven years due to other failure mechanisms. These batteries are susceptible to high ambient temperatures and high ripple currents which must be avoided. Drying out of the battery is one of the failure mechanisms. This is rated as 1200 cycles at 50% DoD.

The lead acid GEL battery has a jelly electrolyte which has been created by adding silicon dioxide (SiO2) to the acid electrolyte. This causes cracks in the GEL when it sets and allows the recombination of O2 from the positive plate through the GEL to the negative plate. GEL technology is used in flat plate and tubular designs. GEL batteries have more electrolyte and drying out is less of a problem than with the AGM technology.

The GEL battery also has a better cycle life than an AGM battery, but the cost is about 10% to 15% higher. These batteries are rated at 1800 cycles at 50% DoD.

The best technology for solar applications is the tubular cell and is used for professional and commercial applications. The capital cost is higher than for flat plate cells but the amortised life cost per cycle is lower. For comparison, tubular GEL batteries have a German-tested cycle life, under IEC solar cycles, of 6400 cycles.

Lithium batteries have the advantage over lead acid of higher energy density or put another way, have a lower mass. If it moves, then one of the Lithium batteries is probably the best option. Theoretically they are three to eight times lighter, but in practice one can expect a mass saving of 50% when compared with lead acid. This loss of size advantage is due to the technology and extra electronic and ancillary equipment which protects the Lithium battery from under- or over-charging, over-current and high temperature, and is usually called a battery management system (BMS).

Typical cost per cycle at 12 V:

All “sealed” batteries have the problem of starting their life when they are made and not when one takes delivery.

Silicon Engineering ensures its “sealed” batteries are generally not older than six months when sold. The German BAE OpzV Tubular GEL battery is only manufactured to order, so delivery is 14 to 16 weeks.